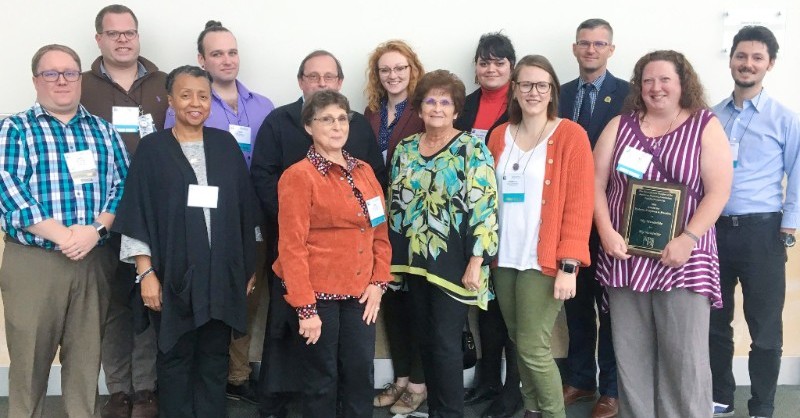 Congratulations Meadville! The northwestern Pennsylvania city (pop. 13,338) was recognized for its Community Heart & Soul project, My Meadville, by the Pennsylvania Chapter of the American Planning Association. The award for an outstanding project, program, or practice was announced at the association’s annual meeting in October.

The recognition came at a key moment—capping off the hard work of the Leadership Team just as the team was handing off to a Stewardship Team charged with shepherding the community’s ideas for action and honoring My Meadville’s Heart & Soul Statements.

“It was a really good way to validate and celebrate the work the Leadership Team has done. It was a great way to energize the new team coming on board,” said Autumn Vogel, My Meadville project coordinator.

My Meadville brought residents together to help plan for the city’s future. The Pennsylvania Humanities Council and Meadville Redevelopment Authority partnered on the resident-driven project. Engagement opportunities included story gathering through

interviews and story circles, story listening lunches, and opportunities to review and validate findings through potlucks and popsicle pop-ups. In all, some 1,400 data points were collected and reviewed. These were used to inform Heart & Soul Statements that expressed the shared aspirations of the community and guided actions that worked to fulfill those aspirations.

My Meadville helped this manufacturing town uncover a sense of pride and identity, Vogel said. Meadville was home to zipper manufacturer Talon, which employed a quarter of the city’s working population. A tool and die industry sprouted up to support Talon, earning the town the moniker, Tool City. Meadville was so prosperous in the early 20th century that the Great Depression wasn’t a factor. But in 1981, Talon was sold, and production moved to Mexico.

Today, nearly 60 percent of the town’s housing stock is rental. Median income is $34,826 compared to $45,637 in the surrounding county. And, as with many college towns, a town/gown divide sometimes creates tension. Residents shared the feeling that the city needed a little boost, it needed some life breathed into it, said Vogel, an alumna of Allegheny College who stayed in town after completing college.

“There was definitely this defeatist mentality. Stuff has left. Jobs have left. Companies have left. Money has left, and there was sense of being overlooked. No one cares,” she said. “In last few years, we’ve really taken that and flipped it on its head. We’ve gotten creative and scrappy and pulled some things off that made it OK to be in Meadville again and made it cool to be in Meadville again.”

Here are some examples of positive changes in the works as My Meadville looks to a new Stewardship Team to keep the city moving forward: