During fall 2015, Community Heart & Soul, a small town revitalization effort started in Vermont, made its way to Galesburg, IL. Ever since then, Galesburg On Track has discovered what Galesburg residents love most about their community and how everyone can make it a place residents are proud to call home. Since the beginning of the Galesburg On Track initiative, this team has gone out into the community, listened to the needs of residents, and made plans for the future.

Galesburg was a stop on the Underground Railroad; hosted the best known of the Lincoln-Douglas debates; was home to poet, author, and historian Carl Sandburg. Ronald Regan spent one year of elementary school here, and Nancy Regan visited her grandparents here as a child.

Galesburg hit the national radar in recent times, when Maytag, its largest employer, closed its refrigerator factory in 2004. Galesburg’s population is the lowest it has been since the 1950s. Median household income is $33,369 compared to $57,166 for the state.

Volunteer and Community Response:
In 2015, the Galesburg city council appropriated $50,000 and, with the Galesburg Community Foundation, which also funded the project, committed to Community Heart & Soul. Galesburg is avoiding the typical strategic planning approach where consultants come in, hold “stakeholder” meetings, leave, and write a report. Instead Galesburg on Track, the name of the Community Heart & Soul project there, was focused on listening to the stories of the people who live here. To know where Galesburg wanted to go, residents needed to appreciate their past and understand what they cherish about where they live.

Economic development is one challenge facing Galesburg. Divides are another. Heart & Soul’s unique way of mapping all groups in a community to see who’s connected to whom helped bridge divides and led to community building discoveries that represented first steps to building a stronger community.

• The Heart & Soul Team visited neighborhoods to speak with people face to face. This not only built trust with residents, it bridged divides. Several team members went to areas where they had never before spent time.

• The city’s faith leaders came together to meet for the first time as a result of Heart & Soul.

• When volunteers with Galesburg On Track learned about children who were food insecure during the summer months, they responded by pulling together a backpack lunch program.

• Recreation was a key theme that emerged when residents told their stories as part of Heart & Soul, so the fire chief started a “walking school bus” to get school children walking to school, instead of taking the bus. 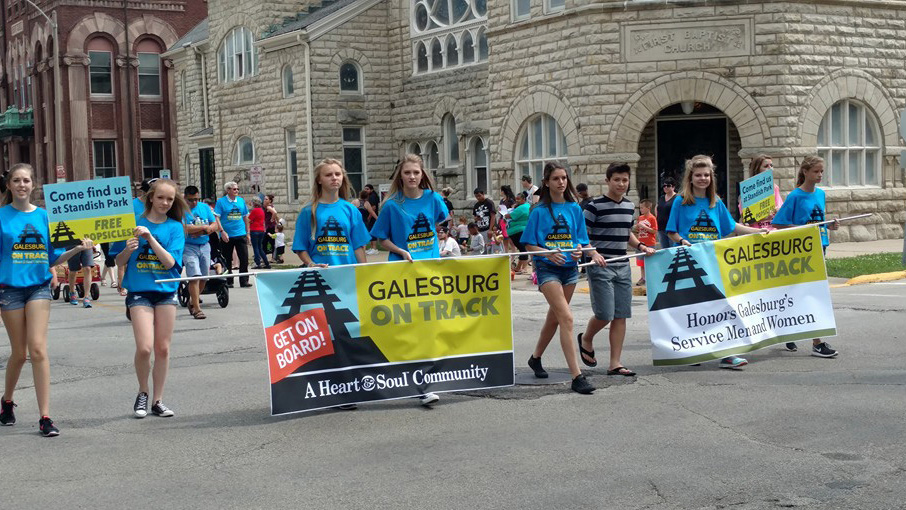