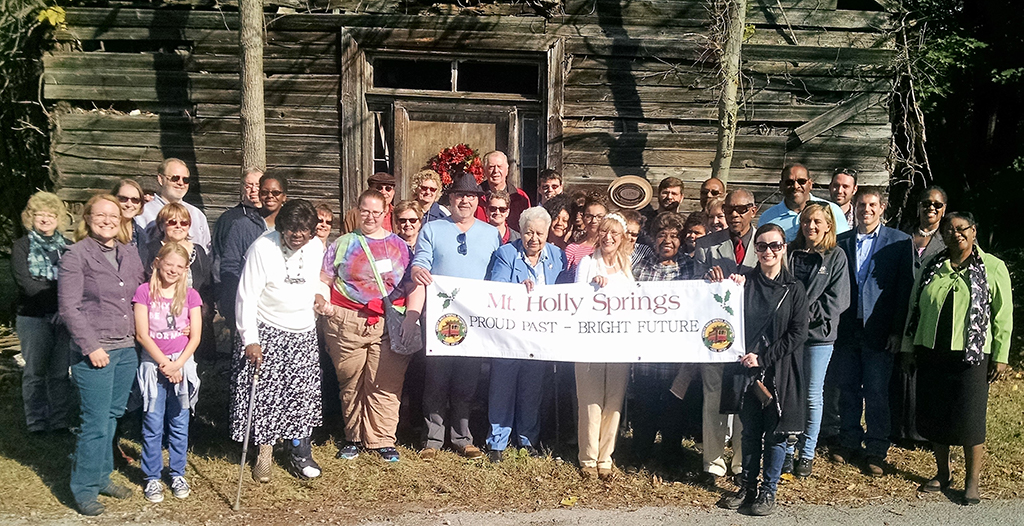 The story of the discovery of  an 1870s church built by a freed slave in Mount Holly Springs, Pennsylvania, illustrates the power of storytelling to not only illuminate the past, but to galvanize a community around an important piece of its history.

As often happens with discoveries, a combination of curiosity, timing, and coincidence began to align when high school students in Lindsay Varner’s oral history class found a newspaper article that mentioned an abandoned African-American church in Mount Holly Springs. It made sense that the area would have an African-American church. The Underground Railroad went through the area and Mount Holly Springs was home to a free black community that settled there before the Civil War.

Determined to find the church, Varner drove down a narrow, dirt road at the foot of a hill where she believed the church would be. She found only a few dozen gravestones leaning in a grassy lot.

Meanwhile, Varner’s attention turned to her role as project coordinator for the Greater Carlisle Heart & Soul, a Community Heart & Soul® project funded with a grant from the Pennsylvania Humanities Council. A significant component of the project entailed gathering stories from community members to find out what matters most to them about where they live.

Among the people whose names surfaced for interviews were “the Gumby sisters,” three longtime residents of Mount Holly Springs. She set up an interview with the two younger sisters, both in their 80s, who, it turned out, had ties to the church. Their grandfather, a former slave and Civil War soldier, built the church and was its first pastor.

Harriet Gumby took Varner to the church. The one room, weatherworn, wooden structure was cloaked in vines. Poison ivy created a natural barrier around the church. Vultures swooped out from the eaves, prompting Gumby to note that they were standing guard over the place. Varner peered inside and saw a scene frozen in time. The pastors’ chairs, pews, hymnals, religious comic books, an oil lamp, even a piano and pump organ were all in the building.

“It was like a time capsule. It was amazing. It was absolutely incredible. When I walked into the church I’d never seen anything like it,” Varner said.

Varner knew this was an important piece of history. She went to work assembling a team of local leaders, historians, and preservation experts, who all kept the discovery quiet until the building, which had a hole in the roof and was deep in dust, could be stabilized and the contents secured.

In September, Varner led a tour of the church. Among those on the tour was a family whose ancestor, U.S. Colored Troops veteran, was buried in the cemetery. They’d been searching for the burial place for years and were so moved when they found it, they offered to help locate a shipping container to temporarily house artifacts from the church.

Today, the 1870s Mount Tabor AME Zion Church has brought the community together to work on preserving this piece of African-American history.